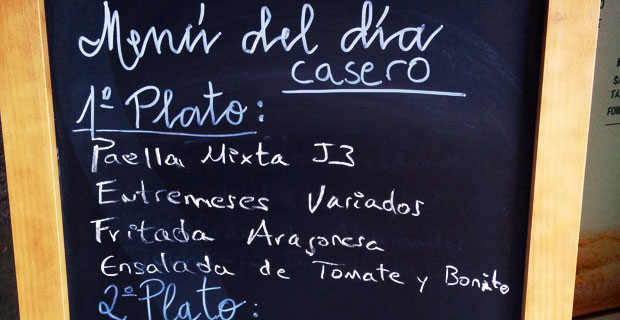 Lunch time can be long and languid in Spain, particularly in the hot summer months, and is usually served a lot later than in the UK – usually between 1 pm and 3 pm. If you fancy egg and chips or an all-day breakfast, then the many English bars and cafes along the coast will be happy oblige, but if you’re looking for a taste of the real Spain, then head into town and try whatever’s on the Menu del Dia – delicious, authentic value for money.

Restaurants started serving ‘El Menu del Dia’ as a way of feeding hungry workers a balanced meal on a budget. With three courses, bread and a drink for a minimal price, it would very often be the only meal eaten during the day so it had to be filling and it had to be cheap – usually using whatever produce was available at the time.

These days El Menu del Dia usually includes a choice of starters (El Primer Plato), a main course (El Segundo plato) and a dessert (El postre). Some may also offer a drink, all for a set price of anything between 6,50 Euros and 15 Euros, with the average being around 10 Euros. Most restaurants serving El Menu del Dia will do so alongside their normal menu, so you still have the choice if you’re only looking for a light bite to eat, or your taste buds just aren’t tickled by what’s on offer.

Starters are often a soup, salad or pasta, with the main course being a meat or fish dish if you’re on the coast. You’ll usually find the Menu del Dia on a chalkboard outside, and usually only in Spanish. This isn’t necessarily to exclude visitors from trying –it’s just quicker and easier and usually only locals will opt for it anyway. This is a great opportunity to test your Spanish language skills… or if you’re really uncertain as to what’s on offer, think of it as a mystery meal!

We’ve recently read a few general rules of thumb regarding the Menu del Dia which we thought we’d share to help you make the best choices for an authentic Spanish lunch.

– If you’re not sure about the restaurant, wait until 2 pm. If it’s packed, it’s a winner.
– If the menu board displays photos of the food to help you identify it, then avoid. This is a good idea in general.
– If the main course is pizza or pasta, again, avoid.
– If you’re in a busy tourist area, head away from the crowds and down the side streets. You’re more likely to find better Spanish cuisine there than anywhere else.
– If you’re on the coast, expect seafood. Not just fresh fish, but real seafood that may be ugly and have extremities attached.
– Be brave, even if your Spanish is sketchy. You might end up trying something you wouldn’t normally eat.

Tell us about your experiences of the Menu del Dia. Where your best experience was and what did you have?