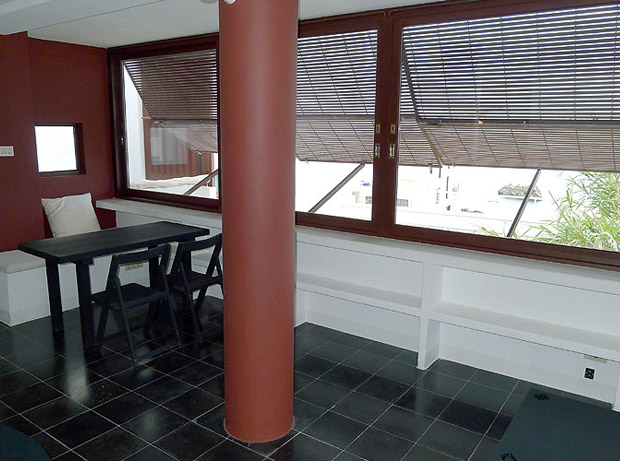 Casa Broner was built in 1960 by Erwin Broner (1898-1971), an important character in the creative scene of the city. Founder of the group of artists “Ibiza59” and an architect and painter who gave their best to the city that adopted him when he fled from the Nazis chasing him for his Jewish origin. The property which functioned as a residence and studio Broner was declared of Cultural Interest in the monument category in 2000 for being a representative building of the architecture of the island and is part of the Broner Foundation dedicated to promoting the work of the artist and other activities of cultural interest. So in addition to spreading the artistic legacy of Broner and his group, is a reference to the architecture of Ibiza and a space for research and exchange of knowledge and architectural proposals.

In 2005 dies Gisela Broner, the artist’s widow and last inhabitant of the property, leaving reflected in her will that the property would be donated to the city council of the city of Ibiza.

The Museum of Contemporary Art of Ibiza is located in the historic town called Dalt Vila, one of the most symbolic and important buildings of the architectural jewels of historical weight safeguarded in the Renaissance walls of Dalt Vila, the old room Armas de la Real Fuerza de Ibiza and stores to Prova, the plans signed by one of the most prestigious engineers of the eighteenth century, Simon Poulet in 1727.

In 1964 he conducted the First Biennial of Ibiza with the aim of promoting, recognize and spread the thriving artistic activity that was in the city, organizers stated that the winning works in this event form the basis of future Museum of Contemporary Art Ibiza, so according to this view pioneered by the City of Ibiza was inaugurated in 1969 MACE Museum, becoming one of the first of its kind and the third oldest in Spain, occupying the same location since its founding.

Ibiza has been since the mid-twentieth century, an important point of agreement and residence of famous and talented artists who have nurtured with their works the cultural landscape of the island and of course the pieces of MACE among them Walter Benjamin, Rafael Alberti, Raoul Hausmann, Tristan Tzara, Wols and Ignacio Aldecoa, the artists of the Grupo Ibiza 59, Equipo Crónica and posters and prints donated by Carl Vab Derr Voort. MACE collection is continuously enriched with Ibizagrafic contest, which recognizes and takes the finest prints and conventional stamping and newer forms of expression involving the use of new techniques.

In 2012, the museum is reopened after being refurbished and extended with a new modern building, which allows a perfect and doubled lighting capacity to appreciate its permanent collection and temporary exhibitions.

Hours April, May, June and September

Hours from October to March

Archaeological Museum of Ibiza and Formentera

The Archaeological Museum of Ibiza and Formentera is comprised of two offices, one in Dalt Vila, complex or old historic district and another in Puig des Molins, which is an important archaeological site that exposes at its headquarters in Monographic Museum finds from the necropolis. It’s two museums in one. The Archaeological Museum led the selection, conservation, research and exhibition of material remains of the historic legacy of the different civilizations that have settled and developed in the current Ibiza territory, such as the Phoenician, Punic, Roman, Arab and Christian finally. 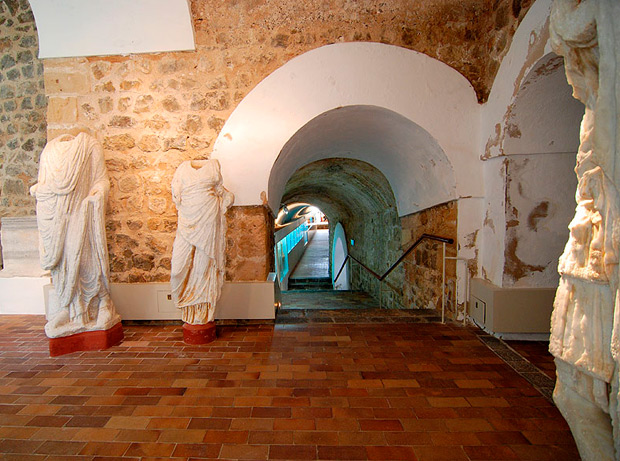 It is located on top of the old town, Dalt Vila, in the Plaza de la Catedral, where the castle is located, the Bishop’s house, the house of the Curia, and the old Lonja (center for trade and trade agreements, also offer product) currently transformed into a beautiful “Mirador” (where we see a very pretty view of the lower town, called “La Marina” and the modern port), and the church of Santa Maria, founded in Cathedral year 1785. Specifically stood since 1907 in the Chapel of the Saviour and the headquarters of the University (including self-government institution Ibiza which was replaced in 1717 by King Alfonso V), built, both in the mid-fourteenth century. Its opening thanks to the kind donation of the Archaeological Society of Ibiza that since its founding in 1903, excavated different places in Ibiza and Formentera (mainly in the Necropolis of Puig des Molins, Sa Barda and Ses Torres, and Sanctuaries in S’Illa Plana and Cuieram).

Puig des Molins – Necropolis / Monographic Museum
Museum located in the Necropolis of Puig des Molins, archaeological site of major importance and uniqueness of their wealth in the Western Mediterranean, was declared a World Heritage Site by UNESCO in 1999. The monographic museum has had a turbulent history since the dramatic political changes that marked its founding period in 1929, the war and its aftermath, until a period of closure and abandonment of 18 years (1995-2013).

The Archaeological Museum in addition to the pieces found in his space also hosts many pieces found in various archaeological sites on the island, mainly showing the funeral rites that have left the islands three civilizations: Phoenician, Punic and Roman.
Currently they are only open a plant of 5 rooms (one, temporary, dedicated to architectural project) and a hypogeum (burial spaces excavated).

The Puget Museum is located in Can Llaudis, a palace that hosted larger families ancestry rooted in Ibiza and is distinguished by its decorative and architectural beauty. Its collection consists of “Saga of Puget” bringing together the best pictorial samples Narcís Puget Viñas (1874-1960) and Narcís Puget Riquer (1916-1983), father and son, respectively, considered the finest examples of Ibizan painting. The oil paintings of father and son consist of a portrait of rural Ibiza in the first half of the twentieth century, so that the route through these 130 works in the collection provide an insight into the picturesque and striking ordinariness of Ibiza . Also you can see many unique images of Ibiza dating from early and mid-twentieth century. The property is equipped with a very beautiful space that is used to house temporary exhibitions of other artists. 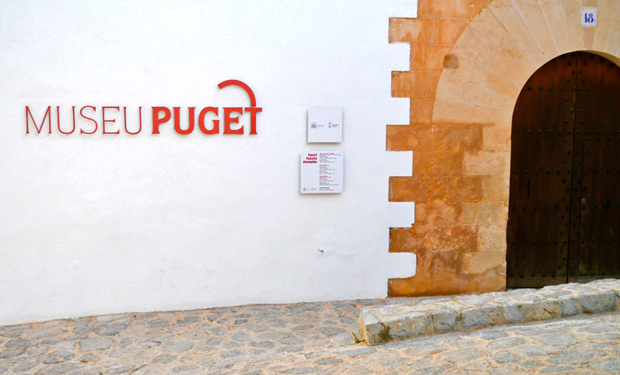 From May to September

From October to April

This modern interpretation center is located opposite the Cathedral of Ibiza and owes its creation to the support of the University of Barcelona and Services Heritage Hall of Ibiza. Through technological audiovisual art tools and claimed this space rescues the memory of the old Madina Yabisa, Muslim city of the Middle Ages. The building of the Curia was restored by architect Toni Marí, who managed to give the space an enviable lighting and an edgy atmosphere that combines perfectly with the remains of the medieval wall on which it sits. 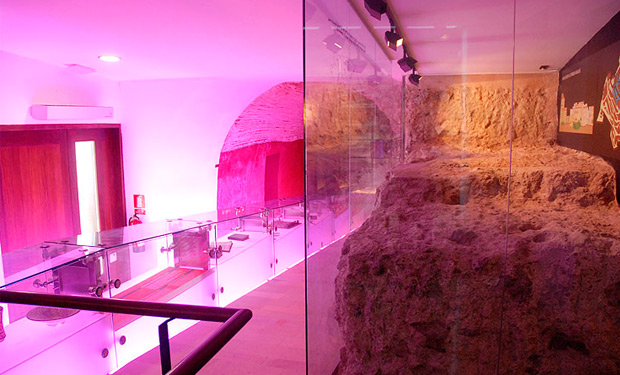 The Cathedral “Nuestra Señora de las Nieves de Ibiza“, lies in the Dalt Vila of Ibiza town and was built on the ancient mosque Yebisah, in the thirteenth century, in XVII century its interior was completely remodeled in Baroque style. The Cathedral Museum is located mainly in the area of the sacristy, but also extends to other sectors of the cathedral. Houses important pieces related to the liturgy and religious art, showing pictorial art, jewelry and religious sculpture. It was founded in 1964 and is reopened in 2006, after being remodeled, presented from a current eight centuries of history of the Catholic Church on the island. 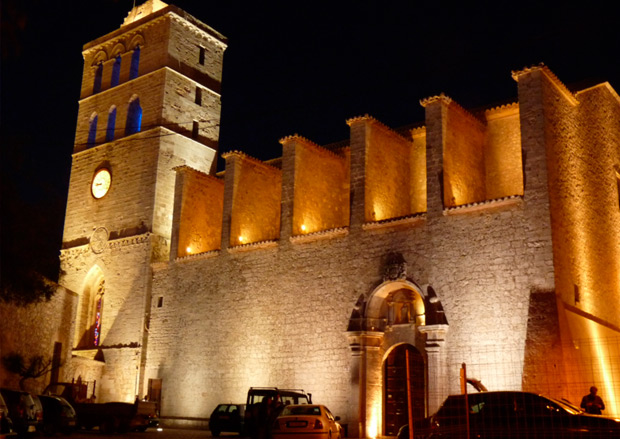